Inside my blood,
submerged,  darting.
I have been here before,
at the beginning of the world.
I have already seen,
in your beautiful blue eyes,
the beaches of plastic caps and mother pearls,
as I see them now
for the first time,
submerged. 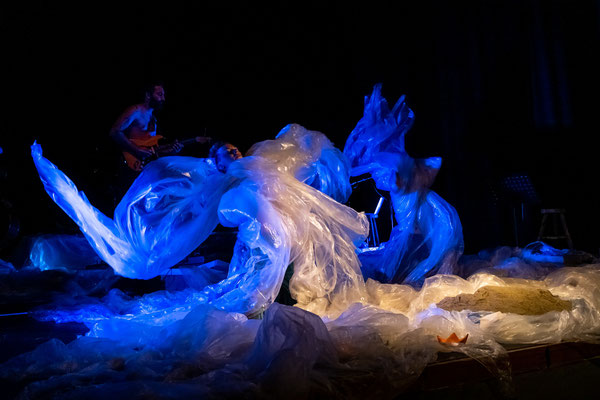 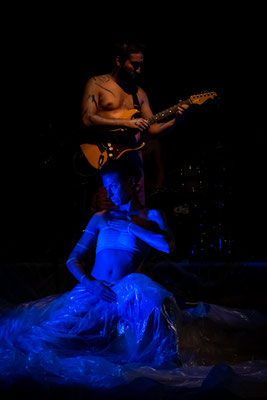 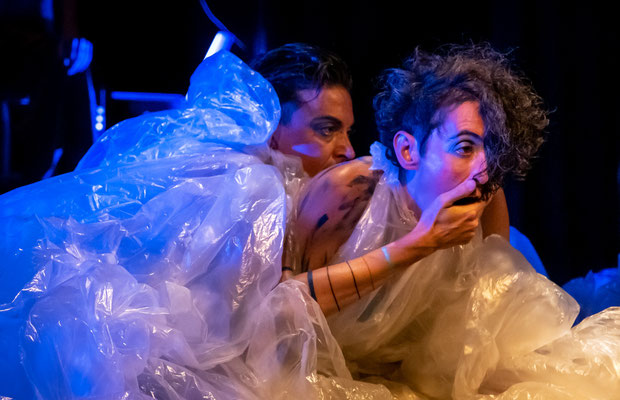 On April the 1st 2022, the album 'Sinking Islands' by the oniric band SATOYAMA is released: a musical journey on the theme of the rising oceans due to the ongoing climate crisis, supported by the Italian NGO Sea Shepherd. Starting from the collaboration with BILOURA, a performative concert is born, emerging the public into

an ocean of sounds, visuals and scenic actions that sway, swirl, bloom, submerge and sing.

Within a circular stage and an immersive situation for the audience, the performative scores melt with the music like the sea encounters the land: it caresses and swallows, it embraces and ablates, it nourishes and ends lives. The poetry of SINKING ISLANDS offers a less anthropocentric perspective on the issues of climate change,

in search of the beauty left to this here-and-now of ours, which is probably one step away from the end of the world.

Composed as s poetic requiem, the performance uses musical, physical and poetic languages to create an experience of drowning. A way of grasping the beauty that exists even while facing the end. Throughout the performance the audience enters step by step into a dimension that increasingly suspends the modern human and evokes timeless forces that have always dominated the dreams and nightmares of mankind. The performers of SINKING ISLANDS interact through sounds, rhythms, voices, gestures, images and movements. They too are an ecosystem, an archipelago, interdependent, inexorably connected.